Gallery (Click on Images To Enlarge):
Videos:
Paperwork:
The Quartz 4 was introduced in 2010, following the demise of the Pullman. It was a mid range model, pitched between the Fiesta (Then called the Quartz 2+2) and the Pennine Pathfinder (At the time, referred to as the Quartz 6).

The model only continued for a couple of years, and examples are rare, but it appears to have been built using the base and canvas of stable mate the Conway Cruiser, as the dimensions appear to be identical. The big difference with the Quartz 4 was in its internal layout, which had never been seen before in the Pennine range (or any other we are aware of) nor has it been utilised since.

The majority of the interior layout was the same as other models, such as the Pennine Sterling and Pullman, as well as the Conway Cruiser. The beds, kitchen and wardrobe are all the same, however, the opposing dinettes of other models were replaced with an L shaped settee and single dinette. This was a very practical layout, although it did come at the cost of one of the cupboard units, adjacent to the door. In order to compensate for this, a fold up table / work surface was situated on the back of the dinette seating. 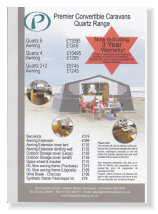